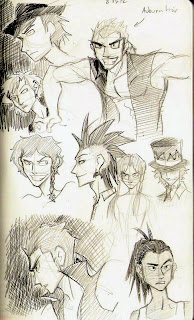 So I’ve been thinking of making a webcomic for a while.

I’m not sure what the story will be about yet. That’s why I’m brainstorming some schemes now and making a few sketches. Today I filled a sketchbook page with nothing but potential cast members of the new story (that’s the image above).

I’ve worked with the girl in the fedora and the girl with the braid on one side of her head before. They’re main characters in a mini-comic of mine, “The Messengers”, which I just finished the script for. The script was two years in the making, mostly because when I first started it the villain was of no interest to me, so I put it away for a while until I could approach it with new eyes. Now that I have it finished, I’m debating if I want to scrap the whole thing in favor of this new idea germinating in my head.

This idea, like I said, is still developing. Right now, there is a lot of thought concerning Muses, the Nine Art Forms as considered by the French, dreams, Egyptian and Greek mythology, and interconnected yet separate worlds a la Kingdom Hearts.

In other words, I have no idea what I’m doing yet.

So you know what I’m going to do?

Work on something else for a while.

I still need to finish the pencils for my submission to the IF-X anthology, and I’m making them extra nice because I intend to use them for a portfolio to send to some comic companies. So I think I’ll switch gears and work on them.

Usually, when I do that, ideas for other projects will whack me upside the head anyway. It’s funny when that happens: when you focus on one thing, your imagination goes off into the wilderness on its own and then finds an idea for you to use. It happens to me all the time.

If you have any suggestions or ideas of your own concerning the idea, please leave them in comments. I would love to hear from you.

2 Replies to “A Comic Concept In Progress”

I just finished making my first-ever knit sweater! It's a bit short in the torso but it's cozy. And it's a rainbow. I love it already.
New #comic just dropped on Ko-Fi! Download the PDF of The Legend of Azu-Mi through the l!nk in my b!o.
Here's this week's #livestream schedule!
Saw some fascist xtian bullshit in the #punkasfuck tag so to karmically balance it here's a print by the illustrious @deci.belfry.art
Finished the inks for this new page of Puzzlespell. The full thing has SO much detail yo.
Just the Tuesday stream this week - taking Saturday off. Links in my b!o for my YouTube and Twitch channels.