Now I have hit that dreaded point that I so loathe otherwise christened “writer’s block”.

I think my problem is that I have a lot of projects I’m sitting on that I just need to get rolling, but for some odd reason or other (like that horrible beast called, “Procrastination”) I can’t get the motivation to plug through them.

I just need to plug through them, inspired or not.

ALSO! Before I forget, if you haven’t read “No Guts No Glory: How to Market Yourself in Comics” by Beau Smith, and you want to get into comics, you’d better damn well do it. I still haven’t broken into the comics field yet, but this book has given me the kick in the ass I needed to get there. As far as I know, you can only get it at Blue Line Pro, so go there.

Don’t Forget to Be Awesome!

As an aspiring comic artist, this debate has been rattled around to the point where I am sick of it.

I am sick of it because I want a straight answer from unbiased opinions and I’m not getting any. Most people who favor self-publishing one’s comics, in my experience from meeting people at cons and seeing things online, are either:

I haven’t heard any opinions of people who prefer to have their work published with a book publisher, and I honestly want to hear MORE of those because I’m thinking about taking that particular career path instead of self-publishing my work.

From the scant few opinions of others I have read concerning the subject, working with a publisher would take the burden of raising money to print the book off your shoulders, plus the publisher would design the cover of the book (something I would trust them with, because I am a comic artist, not a graphic designer). I do not know if anyone can make a profit from this (it seems some people do), but from the sounds of it, you get a certain amount of money from selling a copy of your book, called a royalty. I do not know how much a comic artist can make off of royalties, which is REALLY FRUSTRATING because no one talks about it. Are comic and graphic novel royalties really that p*ss-poor low? I have no idea!

Another perk about working with a publisher is that they can put your book in more and larger stores than if you worked by yourself. And honestly, I want that kind of reach, and I don’t want to deal with the minutia that is invoices and black-logs and AUGH.

Ok, so you’ve heard my b*tchfest about this issue. Does anyone have anything to add concerning self publishing or working with a publisher?

When I went into this challenge, I thought that it would be easy, because I almost always feel like I have something to say. However, it’s hard to figure out what to write about once I finally sit down to blog. Not only do I have to think about the readers, but also about who could stumble upon my page. If it’s a potential employer, and they see a blog post about my particular views on something and they don’t agree with them, what happens then?

Then again, I’m not sure I would want to work with anyone that doesn’t respect my views. But I’m going to stop there before I get started on a tangent.

The point is, updating everyday is difficult, especially on days where I feel like I have nothing to say. BUT! I made this challenge last until the end of the month, and dammit, I’m gonna’ stick with it. I’m going to update everyday until June 30th.

I did that last year and I successfully wrote a 220-page script in one month. BOY did that feel good! It helped to reinforce the idea that yes, comics was what I wanted to do, and I got so emotionally involved with the characters I wrote and drew in the project and I got so invested in the events that happened with them.

So this July, I’m doing the challenge again.

This time, however, I think I’ll cut the page count down to 200 (because 220 was f**king insane!) I already have the idea figured out for what I want to write. I’m super excited for it!

However, I’ll be doing that PLUS reviews for Self Publisher’s Nexus magazine, a fan comic with my friend Chloe, editing another graphic novel, and several illustration projects.

Well, I can put the fan comic project on hold for a bit: my friend I’m collaborating with is in Japan, with very little time to get online, so I can wait to work on that project until she comes back.

Everything else will have to be dealt with carefully. I think I can do this, though!

Don’t Forget to Be Awesome, and I’ll see you all tomorrow!

P.S. I’m totally going with some friends to see the premier of Brave tonight! SO excited!

Well on any other day, I would elaborate on my experiences working at my tables at various conventions I’ve sold my art at, but I’m about ready to head out the door in two seconds, so instead…

I shall point you to a guy who goes in much more detail than me, and who’s totally candid about his experience. His name is Mark Harmon, and he recently had a table at Denver Comic Con, which is a FANCY DEAL by my standards. He talks about his experience selling stuff here.

You should also note the Do’s and Don’ts of selling your work at conventions, because it’s 110% TRUE.

Don’t Forget to Be Awesome, and I’ll see you tomorrow!

Yes, indeed, there’s another piece under construction! I actually started this one way before the previous one. It’s just that this is being drawn in a page of my sketchbook. 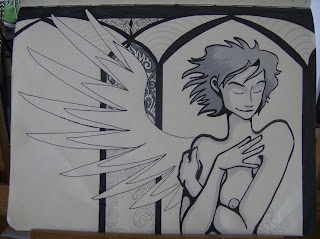 I’m noticing a theme. Are you?

With this one, I definitely want to use patterns in the background to make the goddess figure pop out. The other difference that separates this from the other in-progress work is that this is entirely markers and pens. The other is colored pencils at the moment.

And yes, there is a small flash of boob. Problem? Didn’t think so.

Hope you like it, and Don’t Forget to Be Awesome. :D