So I just came back from a field trip with the 2 Dimensional Arts Association (or 2DAA) to the Toledo Museum of Art to see Frank Stella.

Who is Frank Stella, you may ask? If you don’t know, check out these links first:

Essentially, he’s a non-representational abstract painter who makes gigantic paintings of irregular polygons. He especially likes to play around with color and line, and most of his pieces are named after towns in New England, where he grew up.

The TMA is showing his Irregular Polygon series right now, and some of the pieces on exhibit are show below:

This show is the first time that all of the pieces (I believe there are 12) were shown in the same gallery space at the same time.

These pieces are HUGE. I’m talking about ten or twelve feet high! For their time, back in the 1960s, they were the largest abstract pieces of art made.

Also, Frank Stella the man reminds me a lot of my Grandpa on my mom’s side: a little old man, down-to-earth, tired, and always talking off-topic. He’s hard of hearing too, so at the Question and Answer session at about 11 a.m., when people asked him questions, he would sometimes ask people to repeat themselves because he couldn’t hear them.

Not that he made it much easier for us in the audience to hear him. When he spoke, he had a microphone in his hand, but he’s also one of those speakers that talks with his hands. So he would gesture and talk and the microphone would be swinging away from his mouth. And he was a quiet speaker, which didn’t make it any easier. Despite that, though, he’s a good guy.

Sort of. I’ll be the first to admit I’m not big into abstract art, but I can admire what Mr. Stella is doing when he plays with shapes and colors. I especially admire the fact that the canvases he paints on are NOT SQUARE. They’re actually built to fit the shape that is painted on them. So something like this: 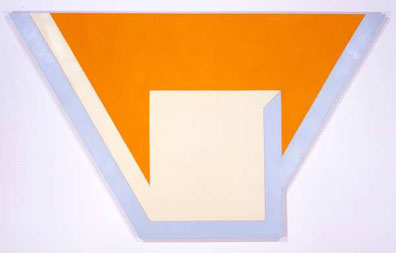 is NOT on a square canvas. It’s cut into that weird trapezoid-esque shape. Plus, like I said before, they’re enormous.

So I admire him for breaking conventional rules of art and doing his own thing.

That DOES NOT MEAN, though, that I’m going to start painting or drawing abstract images tomorrow. Just because I admire it does not mean I love it and want to incorporate some of these ideas into my work. I can safely say, though, that I feel I can understand abstract art a little better now.

If any of you are in the Toledo area, you should go! Admission into the museum is FREE (seriously) and the show is up until July.

I’m going to go for now, and enjoy my lunch and then work on my collages for class. UGH. Why can’t I go back to the museum!?

Next week I’ll be posting pictures I got from the TMA. I would post them today, but I have to get back to work.

(UPDATE 1/31/15: Nicholas from Artsy.net helped give some updated links and art for this post. Thank you, Nicholas!)

One Reply to “Frank Stella, and My Visit to the Toledo Museum of Art.”