Yesterday I moved in to my dorm room (that’s right, I’m a senior and I still live on campus. I like campus life too much to move off it). Pictures of my newly-settled room may be coming soon. ;D

So as a teaser, I’m gonna’ post a sketch from my sketchbook. 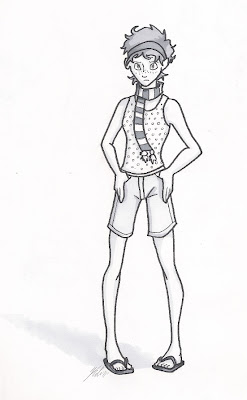 This is Greta. She’s a main character in one of my graphic novels. In her story, she goes to summer camp, only to discover that there’s a cabin in the woods nearby that leads her into an imaginary world called Shadow Land. Unfortunately, in Shadow Land, she’s been branded as a wanted criminal because of a scar on her neck. It’s up to her to find out why.

I already have the first 5 chapters of her story written, but I haven’t converted the script to a rough comic form yet. I’m hoping that over the next few weeks I can do that.

Also, remember that challenge I did where I made a graphic novel script in one month?

First, I’m going to post some sketches of that over the next couple of days.

Second, I’m thinking of doing the challenge again in September. I have a 220-page sketchbook ready, and I have a story idea. So I think I’ll jump on it, even with school and friends and family there.

Anyone want to join me on this challenge?