The wonderful wizards of YOUMACON, BITCHES!

Anyway, yes! This weekend I am off to Youmacon up in Detroit, Michigan! Keep an eye on my Twitter feed, because I intend on tweeting lots while I’m there. Convention pictures will also be tweeted. ;D

In other news, my NEW webcomic, The Legend of Jamie Roberts, is going to be released on November 10th over at SmackJeeves! A link will be provided closer to the release date. In the meantime, enjoy this teaser image of the finished cover art: 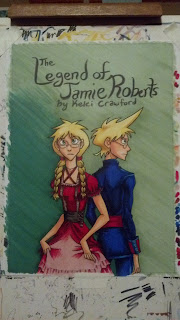 Isn’t it so pretty? I’m so seriously excited and proud to present this work! This has been my baby for years and I’m so excited to finally release it!

The story is about Jamie Roberts, a girl who disguises herself as a man to join the military school, so she can become a hero like her childhood idol, Queen Norsa. However, Jamie and her two best friends, Daniel and Thomas, discover that their nation is up to no good, and they flee the country to another one in the South. In this Southern country of Corith, they are taught by a wise dragon so they can return home and restore peace to their nation.

And there is cross-dressing and dragons and dancing galore!

So again: Youmacon on the Twitter page, and The Legend of Jamie Roberts releasing November 10th!

Don’t Forget to Be Awesome!