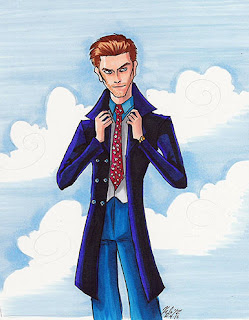 Gregory. The dashing business man with a hidden silly side. That tie has skulls on it, by the way.

And….I didn’t know what to do with the background, so I just drew that.

I really wanted to just play with drawing in a more realistic style than I’m used to, so I made his eyes smaller than I usually would make them and I tried to stick to more naturalistic proportions. I’m not sure it worked this time, but I’d like to give it another go at some point. This is a style of art I want to add to my arsenal, along with my usual style and my caricaturing art style.

ALSO: The Announcement! This is very exciting.

I am currently in the plans of creating a webcomic. A long-ass webcomic. One that will take a while.

The fact that it’s long surprised me, but I have the first act scripted out, and ready to make into final pages. I’ll be outlining acts two and three over the next two weeks. I’m not worried about not finishing this: I’ve been working on this series for years, yes, but this story that I have ready, NOW, is the best I’ve made it so far, and I’m VERY confident in it. And (this is going to sound weird) the characters are ready to be seen.

You’ll recognize one of the main characters already: Thomas. 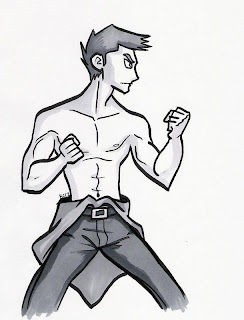 He’s one of the main characters, but the main main one is a surprise.

As for the release date? I’m projecting for sometime before the end of October. Nothing solid yet. I’ll keep you folks clued when I decide on that over the next couple of days.

But start getting excited, and Don’t Forget to Be Awesome! :D