I’ll admit it: I’m a woman, and I’m absolutely in love with Dragonball Z Kai. I love the characters, the ridiculous scenarios, the action, the EVERYTHING about it.

Notice, though, how I said Dragonball Z Kai?

I’ll tell you all a story. Get comfortable, because this might take a while.

Now when I first saw it, I thought it was cooler than Sailor Moon. Personally, I couldn’t stand the girl. I would much rather watch a bunch of dudes do martial arts (I still do. Dragonball Z was the series that got me hooked to martial arts stuff). Of course, in Dragonball Z days, the actual fighting would only occur in one episode out of five, so it was a little frustrating, to say the least. It was hard to stick with the series.

Why did I stick with it?

To this day, I still can’t really tell you. Looking back on it now, I think Dragonball Z makes some great material to riff on in the style of Mystery Science Theatre 3000. I guess when I first started watching it, I did so to laugh at it even though I secretly took it too seriously.

I introduced it to some friends in middle school, which turned out to be a mistake: I was teased rather relentlessly for liking something people saw as “stupid”. After a while I started to hate it just to try and fit in, which is something only a middle schooler would worry about.

Then in high school, I kept my anime and manga interests mainly to myself. I saw new series’, read new comics, and kept Dragonball Z somewhere in the back of my mind.

One day, I was in the band room for a play rehearsal when I saw that someone left behind an issue of Shonen Jump. Since no one else claimed it, I took it and started to read it. Lo and behold, there was a chapter or two in there that took place in the Cell Games, right when Goku pulled a surprise Kamehameha on Cell and used instant transmission/teleport to trick him.

I fell back in love with it, but more specifically, I loved the manga.

The manga was everything I wished the anime was, but wasn’t: fast, fun to read, with great characters and plot twists, and even a bit of saucy humor. There was no filler, no cheesy rock music, no ten episode stare-downs; just action and humor, which is what the series is really about.

Then I heard about Dragonball Z Kai, which is Dragonball Z re-edited, re-dubbed, and in many parts reanimated, with a new soundtrack, to stick closer to Akira Toriyama-sensei’s original manga.

I jumped on that s**t right away. And I fell even more in love with the series.

Steadily, thanks to my absolutely fabulous friend Chloe, her understanding, and her embracing her fangirlism for FullMetal Alchemist: Brotherhood, I was inspired to break out of my shell and embrace my fangirlism for Dragonball Z Kai. It’s even now to the point where I’m getting plushies at cons for the characters. You never would have gotten me to do that ten years ago.

Still, being a fangirl for this particular incarnation of Dragonball Z has its pitfalls. I still remember getting into an argument with someone at ColossalCon who was an adamant Dragonball Z fan and hated Dragonball Z Kai. He claimed it was “dumbed down for the kids” and ruined his childhood.

I can’t help but notice that a lot of people have a similar reaction to Kai. They seem to think that to remake something that they adored as a kid somehow makes it less than perfect. Chloe still gets into arguments with people in the FMA fandom when certain fans hate Brotherhood, even though it stick closer to the original manga, mainly for the same reason that DBZ fans don’t like Kai: it “ruins their childhood.”

Here’s something I want to say for all the DBZ fans out there (and possibly to any FMA fans who for some reason come across this): 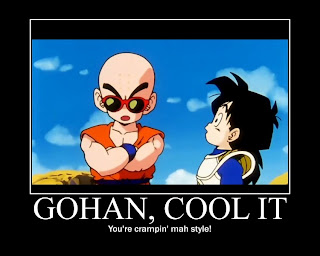 The world is big enough for people to love what they love and hate what they hate. However, do not hate something if you’re not willing to try it first. You cannot hate something you’ve never seen or heard because you have no standard to compare it to (and don’t compare it to any series it may be based off of. People have artistic license that they can exercise). Try it, and if you like it, that’s awesome. If you don’t like it, that’s ok, too: just respect those who do like it.

That’s all for now, and as always, Don’t Forget to Be Awesome!