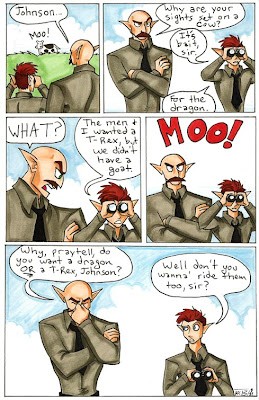 “Johnson & Sir” has a long and interesting story behind its creation.

It originally started as a parody of sorts: anytime I watched my little sister, Kia, play “Jak II”, and she would ride past a Krimzon Guard (the police force of the game), we would both improvise comedic skits based on the guards. Eventually two characters emerged, Johnson and Sir. And it was Johnson’s goal to annoy Sir as much as possible: cross-dressing, talking to orange rats, etc.

A few years later, when I introduced the idea to my friend and then-roommate Katy, we went on a roll with it. As we improvised, I took on and developed the character of Johnson, and she took on the character of Sir. And we had a blast making Johnson tease Sir about his love life and Sir teased Johnson about his inadequacy as a police man.

After I graduated from school, I forgot about these guys on the surface. But they lurked in the back of my mind, waiting to spring.

Until one day, Kristen (my older sister), Marc (my boyfriend) and I were eating dinner at Cracker Barrel. And Kristen looked at me and said, “You should make a webcomic. Whatever happened to Johnson and Sir? I loved those guys!”

And so, with much planning, drawing, and giggling (a long with a few developing jokes involving T Rexes and possibly a sex-change arc), I released “Johnson & Sir” the webcomic on April 30th.

You can read it all here.

“Johnson & Sir” is a comedic little slice-of-fantasy-life, following the exploits of the two elfish cops as they keep the peace in Fantasyville, and between themselves.

Of course, Sir is the most serious of the two, and is the chief of the Police Force. Johnson is the new recruit under his wing. As much as Johnson loves being a cop (because he really does want to serve the better good), he enjoys breaking Sir’s cool and serious demeanor much more.

And there will be heinous shenanigans.

I hope you enjoy it as much as I enjoy making it!

Saw some fascist xtian bullshit in the #punkasfuck tag so to karmically balance it here's a print by the illustrious @deci.belfry.art
Finished the inks for this new page of Puzzlespell. The full thing has SO much detail yo.
Just the Tuesday stream this week - taking Saturday off. Links in my b!o for my YouTube and Twitch channels.
Here's this week's roster of streams happening, yo.
Did I show you this? I finished him last year :3
Today at 2 pm EDT, I'm doing the final touches on a new comic page for New Punk Signal! (Wow, that's a lot of "new" in that sentence.) Yes, this is the comic with the Himbos.