Whoo! It’s been a while since I wrote to you. Sorry about that. But I’ve been keeping busy:

Firstly, I’ve been painting a Christmas present commissioned by my grandparents, which so far looks a little like this: 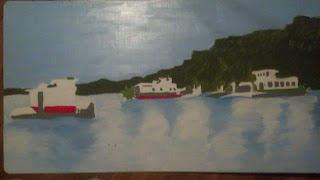 It’s still a work in progress, though.

WARNING: This picture and all the rest on this particular post are not going to be the best: since my computer’s broken, I can’t use my scanner, so I have to resort to using my camera phone. It’s a good camera, but the pictures aren’t as sharp as they could be. Sorry about that.

Anyway, my goal is to get the painting done by the end of this week. I think it’s do-able, since all that’s left is details and sharpening up the edges.

I’ve also been working as a studio assistant with one of my old professors from my college. No pictures of that, though, because it’s not too terribly exciting: mostly tracing symbols onto larger sheets of paper for him to paint over later. Getting the pictures trace-ready, though, had been a trouble and a half, but now I can finally get to work on it.

There’s also a drawing I’ve been working on for Jessie and Ashley, two of my college buddies. I haven’t been making a lot of progress on it yet, because I have no reference images for the male character, but I can give you a sneak peak of the picture anyway: 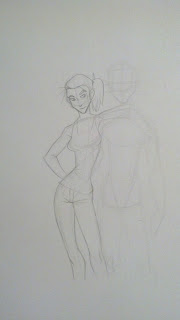 The poster I’ve been planning is finally getting into the concept stages! 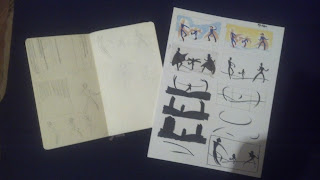 You probably can’t see the Moleskin sketch pages very well. Sorry! I tend to draw pretty lightly, mostly out of habit of inking on top of said pencil marks with pens and markers.

With this poster, I’m having a hard time composing it. Thankfully, Framed Ink by Marcos Mateau has been giving me some inspiration and ideas. If you haven’t read that book, it’s practically required reading for anybody who wants to draw comics or storyboards for animation. It’s that good.

I’m putting the “Prologues” compilation on hold for now, until I get some of these projects out of the way.

But don’t think I’ve only been drawing commissioned work! I’ve also been drawing my fair share of character designs. It’s not just for portfolio building, either. I’m drawing them to have references for drawing the characters later on in the projects they’re in.

For The Legend of Jamie Roberts, I got this gentleman done: 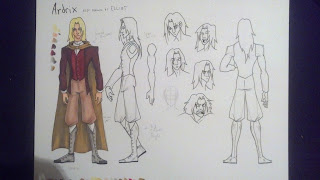 He won’t make an appearance until a little after Act 1, but I wanted to flesh him out or else my brain would forget what he looks like.

I also drew this young man for the same comic: 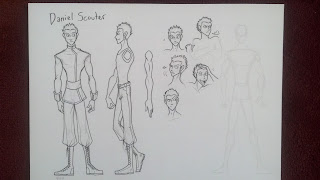 His sheet isn’t finished yet: there’s still the rear-view to ink in, some more faces to draw, and colors to pick. Daniel WILL be appearing in the comic during Act 1, but probably not until chapter 5 or so.

I even drew a character for another project entirely! Her name is Galileya: 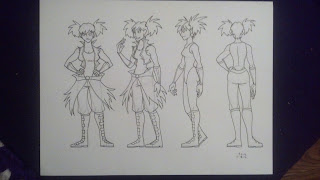 This particular reference sheet had been in the works for entirely too long. I’m glad I got her done. I won’t be getting to her story until much, much later, but I wanted to draw her up before she slipped from my mind.

Because of the enormity of projects I have going on and deadlines coming up soon, I unfortunately cannot take commissions at this time. Once I get these projects cleared, I’ll have time to, but that probably won’t happen until Christmas or sometime after. It pains me to say that, though, because I was hoping to have some time to make Christmas presents.

Speaking of holidays, how was your Thanksgiving? Mine was fabulous and relaxing, and I got to see the Macy’s Parade twice (the man who thought to show it a second time after the morning broadcast was a genius). The only thing I don’t like is that this year, Black Friday started THURSDAY NIGHT in many places.

Just……NO. Thanksgiving is supposed to be a time where you hang out with your friends and family and you give thanks for what you have. Black Friday needs to GET THE F— OFF MY PROPERTY and spread its propaganda elsewhere.

Speaking of work, I’m going back to work on the painting and drawings I’ve got left.

Don’t Forget to Be Awesome, and I’ll see you again soon!

P.S. There are other exciting developments in the works, too, such as an official release of my portfolio website (that’s not this blog), and a re-release of The Legend of Jamie Roberts on its own site instead of SmackJeeves! Also, expect for there to be BIG layout changes on this blog soon.