God I suck at updating this blog. I should get back to posting sketches, because I’m not very eloquent with words.

I kept a sketchbook when I went to Arizona back in May. Here’s some of them, taken by my phone’s camera: 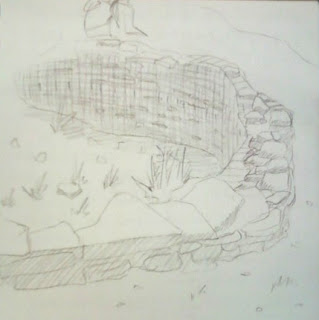 These are some of the ruins at the top of Chaco Canyon in New Mexico. We went there in our first two days of the trip. I loved looking at the ruins of the kivas, or the round houses. People who study the ruins say some of the smaller kivas may have been homes, while the larger ones were ceremonial rooms.

It fascinates me to think that people lived in these small spaces, and it ignites my imagination to think of what a finished kiva would look like and what happened within it. 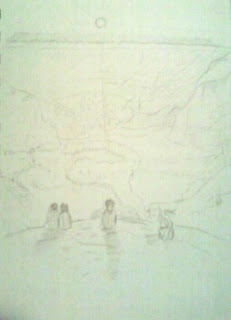 This one is the blurriest picture I’ve got, mostly because the pencils are REALLY light. In this one, we were at Canyon de Chelly in Arizona, and we got the chance to watch the sun set over Spider Rock, which is a pair of giant columns that stretch up to over 1000 feet in height. This was the first time I ever recall being afraid of heights, because we were so close to the edge of the cliff as we watched the sun set. I think that was part of the beauty of watching the sunset was knowing that you were on the edge and that at any moment you could fall. It scared the piss out of me. 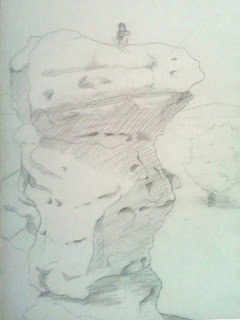 This is by far my favorite sketch. This was drawn at the top of the Black Mesa in Arizona as the other students and I explored Amos Johnson’s property (Amos Johnson is a Navajo Tribal Council member, and let us stay on his property for a few days). James thought it would be a brilliant idea to climb this particular standing rock. Once he got to the top, he looked down at all of us and said, “…I don’t know how to get down from here.”

After laughing at him, I drew him and the rock.

I hope to be posting more sketches soon. I’ve got SO many sketchbooks and awesome ideas I’ve been playing with this summer. I don’t have a scanner, however, so you folks may have to put up with cell-phone quality photos unless I can get my camera and computer to like each other again.

Don’t Forget to be Awesome. :D

All set up at SPACE with @bwhcomics yo! We're here all weekend. Check us out for special fundraising deals and cryptids.
NEW BOOK CASE JUST DROPPED! This beautiful baby just arrived in the mail and I HAD to put it together. I love it SO MUCH 😍
Steve's to-do list in New Punk Signal is my favorite thing. Also, it's a callback to a joke my older sister and I had for years.
Thank you @jessicakmcintosh for asking me to draw these two! It was so much fun!
I'm available for commissions!
Only 1 stream this week, because something special is lined up for Saturday. Hope I can tell you about it soon - until then, feel free to lurk on tomorrow's stream!