Boy do I feel bad for not updating sooner.

I have a legitimate excuse, though: I’ve been working on my webcomic. 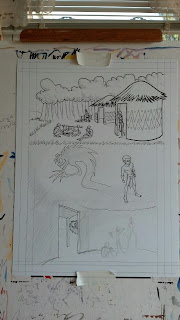 Here is the first page before blacks and tones were added.

And here it is after…so far. 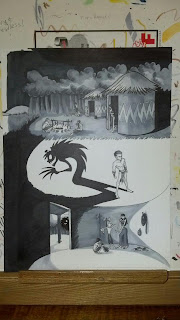 I’m still trying to figure out the lower two panels, and some adjustments have been made to the top panel since I took this photo. Lettering for this page will be added digitally. There are other technical things I could talk about, but I’ll leave those out for now.

And this comic WILL be hosted on SmackJeeves! I decided to go with SmackJeeves because they have an awesome community of creators and readers and the comics that are on there are fabulous. I wanted to help contribute to their awesomeness.

I’ve also been working on some other projects, too: an old professor of mine is commissioning me to be his assistant for the studio, and I’m painting a mural for my grandparents for Christmas. I want to get started on a commission for some friends of mine, but I have yet to see reference images from one of them. Le grrrrr.

As for the Storenvy: I have taken photos of some new merchandise, but the camera’s being a douche and won’t turn on half the time. Once technical difficulties have been solved, new products will be posted for sale.

That’s all for now. Don’t Forget to Be Awesome, and I will see you soon!

Just the Tuesday stream this week - taking Saturday off. Links in my b!o for my YouTube and Twitch channels.
Here's this week's roster of streams happening, yo.
Did I show you this? I finished him last year :3
Today at 2 pm EDT, I'm doing the final touches on a new comic page for New Punk Signal! (Wow, that's a lot of "new" in that sentence.) Yes, this is the comic with the Himbos.
Sneak peek at a new project I'm pursuing for 2022 - the Tarot Major Arcana.
Today's warm-up.